Creamed peas. If you are envisioning over-cooked, mushy peas laying in a puddle of cream like something in an Old English pub, then you are not familiar with this version. This recipe involves fresh, spring peas and it is delicious. I have been wanting to make fresh peas for awhile now, so the other day when there were fresh, English peas for sale at Trader Joe’s, I snapped them up. Now, I must admit, I love peas. Not the aforementioned over-cooked version, but even frozen peas with a little butter and salt, slightly undercooked so they still pop, is something I make often. So the thought of fresh! English! peas was so exciting for me, I can’t even tell you. And though I could have served them simply with just butter and salt, I wanted to do something a little more. I ended up kind of combining two recipes that I found on Epicurious and changing them around to make one that was more what I was going for. Can I just say? This recipe was life-changing for me! The fresh peas had a distinctly sweeter profile than even the highest quality frozen, and combined with the onions, it was scrumptious (yes, I just said “scrumptious” to describe a vegetable). I loved them so much I made them again a few days later and used frozen, just to see how much difference there would be. And though it was still delicious, there is something very special about the sweeter, more distinct taste of the fresh. I urge you to go and get some fresh peas while they are still around (it’s a very short season).

I used regular onions, but obviously, you could use pearl and it would be even more delicious. And this would make a great Thanksgiving side. 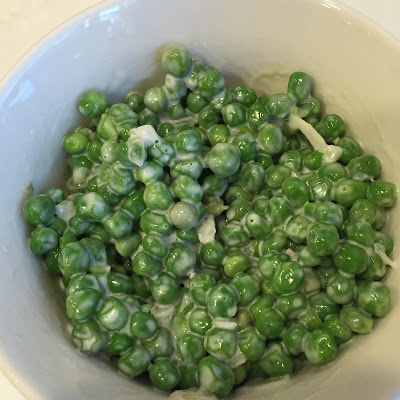 Creamed Peas with Onion and Chives

If using fresh peas, cook in boiling, salted water uncovered until tender, about 5 minutes (mine took a little longer, but the original recipe said 3-5 so start testing around 3 minutes). Drain.

Meanwhile, briskly simmer the cream in a heavy saucepan until slightly thickened and reduced, about 4-5 minutes.

Cook onions in butter in a skillet over moderate heat, stirring, until softened, about 4 minutes. Add cooked fresh or frozen peas and cook, stirring, until heated through, about 3-5 minutes (frozen will take a little longer). Stir in cream, salt, and pepper to taste and stir around a bit, uncovered, until peas are well coated and everything is blended together. Stir in chives and more seasonings to taste, if needed. Makes 5-6 side-dish servings.